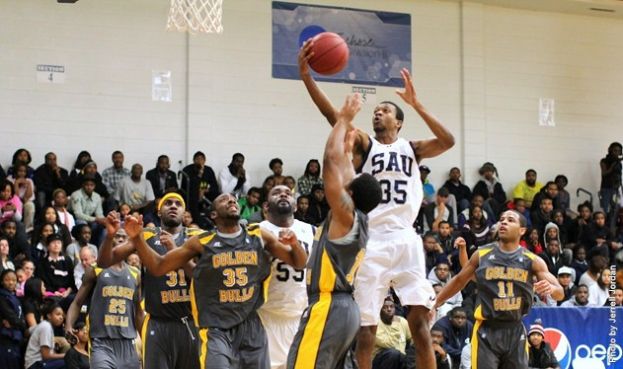 Men’s Head Coach Lonnie Blow, Jr. and his coaching staff at Saint Augustine’s University have preached rebounding to their basketball team since the beginning of the season. Apparently, the players are listening.

The Falcons owned the backboards in a 66-60 victory over Johnson C. Smith University inside packed Emery Gymnasium on Wednesday, Jan. 23, 2013. The victory was the third in a row for the Falcons, who moved into a tie for first place with a 2-0 record in the Southern Division. The Falcons are 12-6 overall and 5-3 in the CIAA.

The Falcons beat a pretty good Johnson C. Smith squad by dominating the glass. They out-rebounded the visitors from Charlotte, N.C., by a whopping 51-26 advantage. The Falcons tied their largest rebounding margin of the season.